A combination of two individual opportunities created an exciting new collection of work for Betty Spoke when the designer began living & teaching out bush in May 2018, in a small township in the Northern Territory. Arnhem Land is a vast area of untouched landscape on the humid northern edges of the Australian continent designated for the Indigenous Peoples of Australia. An area where “whitefellas” require a permit to gain entry to country & country retains the significance of ceremony. Here she encouraged an approach of self sufficiency through sewing amongst the local ladies – teaching mending, dress making, creating, up cycling & crafting.

The township rests in the shadow of Injalak Hill, a striking sandstone monolith that holds nearly 8000 years of history through rock art. Understandably influenced by the talents of their ancestors, artistic capabilities are nurtured & encouraged through the local Arts Centre of the same name. Injalak curates stunning Rarrk style artworks & astounding screen printed fabrics, all created in community by local workers featuring designs of dreamtime & “bush tukka” from inspiring local talent.

Between working hours, a new collection was designed & manufactured. This would be the first fully Zero Waste collection from the designer made from her pick in quality linen cottons. The newly adopted pattern drafting style would respect every inch of the bespoke, one off colour combinations kindly provided by the Injalak Arts team. This partnership between herself & the artists of Arnhem Land is a tribute to the Think Local, Act Global ethos to which our designer is so keen to uphold, encouraging the supporting of local industries with a focus on combining quality with creativity.

These works were showcased by request on both the eastern & western shores of the continent in what has been described as the worlds largest Environmentally focused fashion showcase. Eco Fashion Week Australia 2018 was a feat of organising by director Zuhal Kuvan-Mills featuring ethically minded showcases from designers around the globe.

View basket “Drop Crotch Two Piece” has been added to your basket. 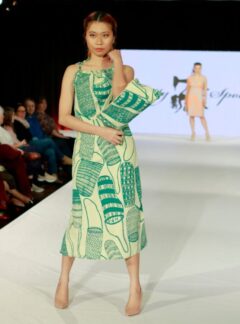 This slim fit dress features an A-line skirt with centre back zip fastening that leads into an open back bodice with tie strap details – allowing versatility with either vertical or cross over strap attachment.

The 30″ waist sits very flatly around the stomach with a draw string bust feature accommodating sizes up to a D cup. A cute summer daywear dress with great movement that can easily be accessorised into stylish evening wear.

Unique items in this fabric – not to be replicated. Bag available separately. 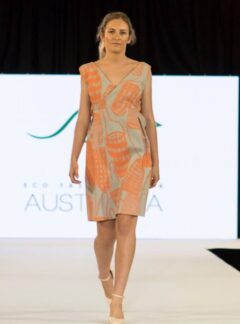 This zero waste empire line dress features a plunging front fold over with a low cut back detail. The bust line will accommodate a small or medium shape while the generously cut pleat detail skirt will allow a comfortable fit for most body shapes. 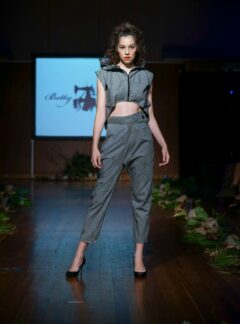 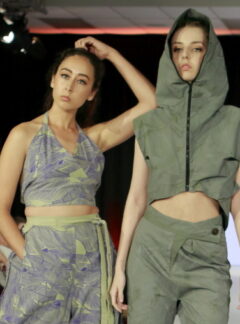 This zero waste two piece is cut from two rectangles.

The trousers are a drop crotch for extra movement. They are approx 36 ” around the waist band.

The zipper top can be worn as a jacket or bodice. It has an interesting wrap over back detail & a glorious, full size hood! Will accommodate sizes small or medium. 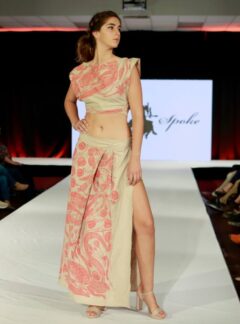 This is a zero wrap duo. The skirt has multiple fold features creating an amazing drape with generous movement. The wrap over is designed for small hips or medium sized waists to create a dramatic slit with a chunky waistband belt hanging alongside.

The crop top is also a self tie front & back closure, accommodating small or medium sizes up to a D cup. 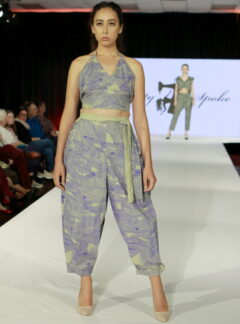 A fun, zero waste cut two piece featuring a bikini inspired triangle top with tie back & neck fastenings to accommodate most female upper body shapes. The empire band has a cute fold down detail on the back to give an almost backless shape.

The wrap pants have a low crotch & LARGE pockets! They can be worn either on the hip or the waist, allowing them to sit either on or above the ankle. Both cute & comfortable.